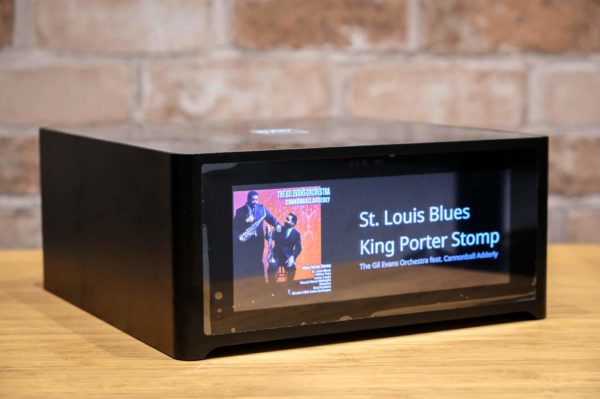 Separate components have many benefits for those chasing the ultimate sound quality. However, for those who value simplicity, the NAD Masters M10 could be all you ever need. With the M10, NAD has combined state-of-the-art amplification with some of the best streaming software around. The result is a space-saving all-in-one solution with very little compromise.

If you’re like many music listeners nowadays, chances are that your primary music source is streaming or storage based. Not only is streaming convenient but with lossless services such as Tidal HiFi (and hopefully Qobuz, soon), it can also sound just as good as CD – if not better. It also means that one component, such as the M10, in your system could be all you need.

We’ve been lucky enough to get our hands on an M10 prior to launch to put it through its paces.

The M10 utilises NAD’s sophisticated HydridDigital nCore amplification to deliver a huge 100 watts per channel despite its compact size. This ensures that it has the ability to drive nearly any loudspeaker within reason. As for streaming duties, the M10 incorporates the latest generation BluOS network streaming and multi-room operating system. BluOS supports all the major music streaming services such as Spotify, Tidal, Deezer, Amazon and TuneIn radio. For Apple music users, AirPlay 2 integration is on the way via a future software update plus Bluetooth is also available. Control, for the most part, is via NAD/Bluesound’s excellent BluOS app, or its large touch screen display. Internet connection is via dual-band Wi-Fi or ethernet.

As for physical inputs, the M10 includes digital and analog line-level inputs to cater for devices such as TV, CD player or turntable (although no phono pre-amplifier is built-in). Whilst all these inputs are a given, we were very pleased to also see the inclusion of HDMI-ARC. If your TV also features HDMI-ARC (most do), and with an HDMI cable between the two for TV sound, your TV remote can then also control the volume of the M10 for very simple operation. With many stereo amplifiers now featuring onboard digital-to-analog conversion, it’s a feature we’re surprised to not see more of and a very welcome addition here.

With its colour touch screen display, solid brushed aluminium casing and smooth glass top panel, the M10 looks very cool. It’s slender, minimalist design gives it a modern look not usually associated with this level of performance. Although, one slightly annoying omission for us is the lack of a dedicated remote. Admittedly though, with TV volume controlled via HDMI-ARC and streamed music and its volume controllable via the BluOS app, for most users, this is unlikely to be an issue. Although, having to resort to the app or get up whilst listening to vinyl could be an inconvenience for some. Mind you, the M10 can also learn IR commands from any IR remote you may have spare. The only other minor omission is that of any wired headphone amplifier, sadly (although Bluetooth send is possible).

Listening to the M10 connected to a pair of PMC twenty5.21 speakers reveals a smooth and powerful presentation that matches very nicely with the PMC’s high resolution and speed. With vocals, in particular, sounding very natural and effortless. Imaging was great with excellent separation and depth. Whilst I thought the soundstage to be lacking some width and height, it’s our experience with Class D amplification that additional running-in time often helps dramatically here.

Operation is excellent. The BluOS app is one of the best in the business and the touch screen worked faultlessly. Nice touches are the ability to dim (or have time-out) the screen and lights (a feature missing on the Naim), and the large artwork and now playing information. Or, you can also choose to be accompanied by virtual VU meters!

The most obvious comparison to the M10 would no doubt be the Naim Uniti Atom. Both devices share a similar price and feature set with a few key differences. The Atom has the advantage of physical remote control and headphone amplifier, however, the M10 has more power on tap and MQA support (a format used for hi-res streaming by Tidal).

In comparison, the Naim Atom has a slightly leaner presentation but with a more expansive soundstage. But again, I suspect that the M10’s soundstage to improve with more running. With that in mind, I felt that the M10 made for the slightly better match to the PMC’s, but, I could see the Naim perhaps having a slight edge with some Focal or B&W options.

The M10 has another trick up its sleeve though. Coming soon via a software update soon is Dirac Live Room Correction. Considered the most advanced room correction software available, Dirac promises to further improve the M10’s performance. Hopefully, Dirac will be available by the time of the M10’s Australian launch so we can try it out for ourselves!